‘My story began about five years ago. I was diagnosed with Oral Lichen Planus, which is an auto immune system disorder causing ulcers and burning in the mouth.

Shortly after my diagnosis I noticed some dark patches on my forehead and put it down to pigmentation, but then I noticed a few small bald patches on my head. I went to see my GP and they said it was just alopecia and that my hair would grow back.

Months went by and my hair did not grow back and I was starting to get really worried and therefore went back to my GP, again they said it was alopecia. I asked if it could be connected to the menopause and he said no.

As time went by my hair still did not grow back and the patches continued to appear. Although I was very concerned and it was starting to make me feel upset I just continued to hope my hair would grow back. I did not want to go to the doctors again as he did not seem too concerned.

Two years later my hair still had not grown back and was actually getting worse, so I went again to my GP, but this time my daughter who is a nurse advised me to insist on seeing a dermatologist. I received an appointment to see a dermatologist and went fully expecting to be told the same as what my GP had told me, but when I walked in the room she said to me “I have been reading your file and I see you have Lichen Planus and I am pretty certain that you have a condition which is called Lichen Planopilaris (LLP), which is an uncommon inflammatory scalp disorder which leads to permanent hair loss. LLP is considered to be part of the same condition as Lichen Planus.”

The hospital performed a biopsy and one month later I was asked to go back and get my results. My family offered to come to the appointment with me, but still trying to keep positive I said I would to go on my own. I felt a little bit like a fraud as after all I was not poorly in the sense I felt unwell, a decision I very quickly regretted.

When the dermatologist told me that I had Lichen Planopilaris and that I would most probably lose all of my hair and it would never grow back I was really shocked. Even though I knew what they were looking for when they took the biopsy. After all I was told that this is a very rare condition so why would I be that unlucky person to have it. She said that there was a treatment I could try but there had been none or very little evidence that it had worked, and there were also some not so very pleasant side effects which I need to know about. She said that they were very rare but one being I would need regular eye tests as the medication can cause problems with your eyes and the other symptom was that it could cause problems with my kidney function. They gave me a prescription and I said I would discuss this with my husband. I walked back to my car and sat there and cried.

I really wished at this point that I had taken someone with me as I felt so upset and didn’t feel safe driving home. I tried to call my husband but he did not answer so I called my mum. I sat in the car talking to her for a good while before I set off home.

I really did not know what to do about taking the medication, as the thoughts of losing all of my hair was too much to bare. On the other hand I did not want to cause any other problems with my kidneys or eyes. We decided together that I would not take the medication based on the facts they had presented me with that there was no evidence of it working. If there was evidence that it may work it may have been worth trying.

As my hair loss got worse I decided to get a wig and try and wear it but I just could not get on with it. I felt like everyone was looking at me, even though friends and family said you couldn’t tell I knew you could. I stopped wearing it as I could still get away with my own hair at this point but it was just getting worse and worse.

I asked my friends and family to be honest with me when they thought the time was right and that it was getting too noticeable, which they did. It was the most awful feeling, my confidence had hit rock bottom and I could not stop crying. My family began to get worried and said that they thought I needed to get some help. I went to my GP and he prescribed me some anti-depressants, and said that he felt I would benefit from counselling. I didn’t want to accept any counselling but started to take the medication which helped, but still could not get used to wearing a wig.

Then a friend of mine told me that her friend had worked at a clinic in Manchester called Lucinda Ellery who may be able to help me. I looked at the website and immediately made an appointment.

I went for a consultation and took my sister with me for support. A gentleman called Chris told me all about the intralace system, he hadn’t even given me a price and I had already made my mind up that I was going to go ahead. I would have had it done there and then if I could. An appointment was booked and two weeks later I had my new hair fitted.

The change in me was unbelievable. The whole experience was life changing for me, which may sound a bit dramatic as my condition is not terminal. However your appearance is a very big part of who you are, and often whether right or wrong is how some people judge you. The people at the salon were so lovely and understanding and made me feel very special and it mattered to them too that what they were doing looked good.

Thank you to everyone involved.

I would recommend Lucinda Ellery to anyone, and would be willing to speak with anyone who has any concerns about having an intralace system fitted.’ 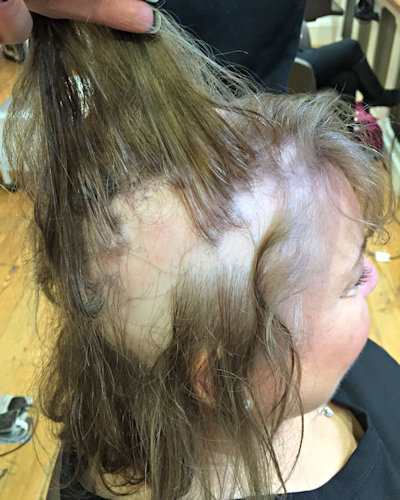 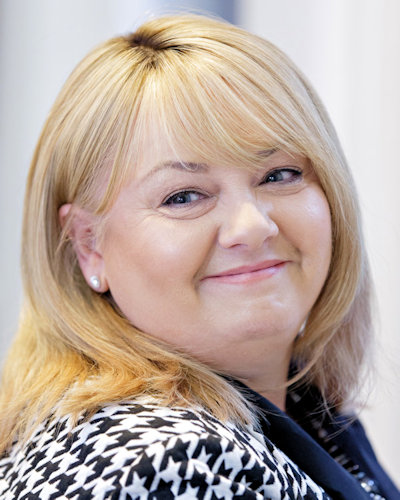 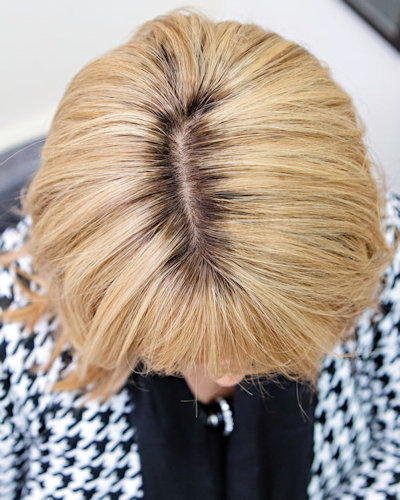