Read the article from Now below 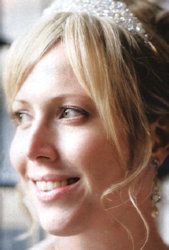 Julia Jolley has been going bald since she was just 19

Actress Jada Pinkett Smith has opened up about losing her hair. Speaking candidly about her experience, the wife of Will Smith admitted she was terrified when she first realised clumps of her hair were falling out.

'I was in the shower one day and had handfuls of hair in my hands and I was like, Oh my god,am I going bald?' she says.

The Magic Mike XXL actress, 46, now keeps her hair cropped so that it looks thicker. She's also admitted to using steroid injections, but says they are 'helping, not curing'.

Julia Jolley, 41, has battled hair loss too. She was devastated when doctors told her she'd eventually go bald...

' I first noticed I was losing my hair when I was 19. I was at university, and, as I tied my hair up, my ponytail seemed thinner than usual. I didn't think much of it - but in the years that followed, I couldn't ignore that my parting was growing wider. I remember dying my hair black and being shocked by how easily you could see my scalp through my newly darkened locks.

So, after graduating in March 2001, I went to the GP, who diagnosed me with female pattern baldness - also known as alopecia androgenetica.

There was no known cure, and it would only get worse. Leaving the GP, my chest heaved with sobs, I was certain that any hopes of getting married and having children had been ruined. How would any man find me attractive now?

Desperate, I researched ways to make my hair grow. I used expensive shampoos and took a contraceptive pill with higher oestrogen. When that didn't work, I resorted to styling my locks into a blonde pixie crop with a side parting swept across to make the bald patches look less obvious.

Then, in September 2006, I met Mike through a mutual friends. For as long as possible, I kept my alopecia a secret. I finally told him while we were curled up one night on the sofa. The hardest part was explaining that, while my hair looked thin now, it would eventually be a lot worse, until it was obvious that I was balding. Closing my eyees and waiting for his reaction, I felt Mike's arms aroud my shoulders. He was unfazed.

'I love you, with or without hair,' he told me.

After two years together, he proposed. Of course, I was excited, but my elation quickly faded when I realised I'd be a balding bride.

I spent hours online searching for thick veils and huge head pieces. I needed somethign that would cover as much of my head as possible. I dreaded to think what the pictures would look like if the sun was shining right onto my scalp.

Then, one night in June 2008, Mike said he'd been searchign for solutions to my hair loss and came across the Lucinda Ellery website - a hair studio with over 30 years experience in providing hair-loss treatment.

As I read through the page, I couldn't help but feel sceptical.

'This sounds too good to be true!' I told Mike. But at this point I was open to anything, so I booked an appointment.

At the studio, Lucinda showed me her unique Intralace system - a mesh that is placed between your existing hair and scalp. Additional hair is them added to the mesh and plaited into your own remaining hair. While it wasn't a cure for my alopecia, it would completely disguise it and, unlike a wig, I didn't have to worry that it could slip off. With Lucinda's help, I picked my new hairstyle, length and colour. I chose blond hair, that came a few inches past the shoulders with a slight wave. It was amazing - I wasn't just picking a style that would cover my bald patches - I could have whatever look I wanted!

It took a full day for the Intralace to be fitted, and I passed the time flicking through magazines and browsing the internet. When it was complete, I was speechless as I looked in the mirror. For the first time in years I had a full head of long, thick hair.

Back home, even the simplest tasks, like washing or combing my hair, felt like a treat. And my confidence levels soared almost immediately.

Our wedding in Septmeber 2008 was one of the best days of my life and, rather than a heavy veil, I opted for a delicate tiara. Since then I've gone back to Lucinda Ellery every eight weeks to have the mesh tightened and every two years I'm fitted with a new Intralace system. Each time it's reattached, I can see what remains of my hair. Wheras before, I'd be able to cover the bald patches with a side parting, now it would be impossible, the hair is so thin and sparse.

It's been 10 years since I had my first Intralace fitted, and I'm so used to it, it feels like a part of me. Now, I'm a mum to Erin, seven, and Zachary, four, but I always find time for my appointments - I don't see it as a luxury, but as a necessity.

The price of the cure

It costs around £120 for regular appointments - not much more than if you were to get your hair coloured and styled at a salon. But each new Intralace system is more expensive, setting me back around £2,000. Mike and I save up a bit of money each month to afford it. I'm happy to give up designer make-up and new clothes in favour of my hair.

I think it's great that Jada is speaking out about her hair loss. It affects more women than I realised. Hair is all too often seen as a symbol of femininity and I lost all confidence when that was suddenly taken away from me. I thought I was going to spend my life miserable. But now when I look in the mirror, I'm happy with the person I see. ’ 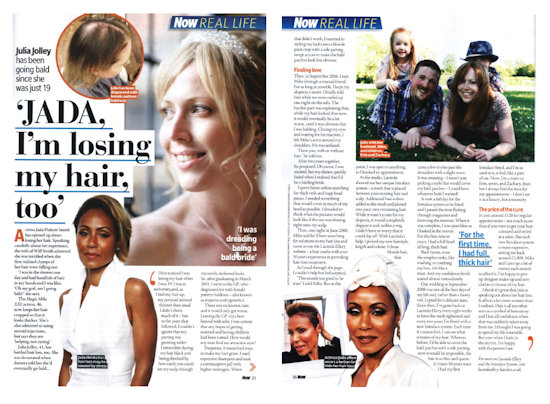