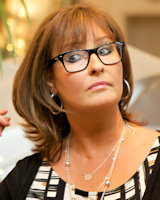 Jacqui took the brave step of changing something that had been holding her back from happiness her whole life… JACQUI PULLING, 60

Standing in the corridor at school with my friends, I saw one of them turn to me.

'Your parting is so wide,' she said, pointing.

The whole group stared at me, before bursting out laughing.

I went home that evening and cried to my mum Lillian.

Ever since I was a little girl, I’d wished my locks were different. I had thin hair, and not much of it, and I was so self-conscious about how I looked.

Over time, I became good at disguising my straggly tresses. But I hated it, and would stare at girls with thick locks, willing myself to be like them.

Countless times, I tried and failed to find a product that did what it promised on the label — thick hair, glossy mane, luscious locks — but I was always disappointed. I even became a hairdresser.

I learnt to make sure people didn’t stand above me, and avoided sitting directly near any bright lights. I tried to make the most of other areas, like my face, and became an expert in doing immaculate make-up. I also wore nice clothes to draw attention away from my scalp.

But despite this, to those who knew me, I always appeared confident and bubbly. I got married and had my daughter Kate.

But inside I felt un-feminine and ugly. I thought old men went bald, not young women.

Then I read about something called female-pattern baldness, where women lost hair along their parting like me.

It was genetic. But my parents didn’t seem to have it. Neither went bald, although my aunt did.

I was convinced that’s what I had, and I even went to the doctor about it. But nothing she prescribed worked.

I tried eating healthily and adding more protein to my diet, but to no avail.

Then, after 17 years of marriage I got divorced and feared facing life on my own. That was, until I met Neil.

Our relationship flourished, we got engaged and he moved in with me.

But I went to great lengths to hide my lank locks. The worst was when it was wet. I’d lock myself in the bedroom as soon as I’d finished showering.

'Is it OK to come in now?' Neil would ask, knocking on the door. But I’d always make sure my hair was blow-dried before he saw me.

If he noticed that I was insecure, he never said a word about it.

Then one day, we were watching a makeover show on TV. There was a woman who had lost her hair while pregnant. She had a special hair system made and looked amazing.

Neil turned to me. 'You should look into that,' he said gently.

I was horrified. I'd convinced myself he hadn't noticed. 'I didn't realise you…' I trailed off, mortified that he’d broken our unspoken taboo.

'I think you’re beautiful,' he reassured. 'But I want you to feel more confident.'

The salon chain was called Lucinda Ellery, and I made an appointment at the one nearest to me.

Initially, I was embarrassed and said no to Neil's offer to join me.

But then I realised I had to stop shutting him out.

Lucinda herself was there when we went to the salon, and talked us through the various procedures.

As I listened, I felt horribly selfconscious in front of Neil. I was so used to hiding my problems.

In the end, I decided to opt for the thickener treatment.

It filled out the thinning areas perfectly, and made my hair look thick and full for the first time ever.

Feeling more confident, I told the stylist how tired I was, physically and emotionally, of hiding my hair and trying to make myself look feminine.

'I avoid mirrors, and summer is the worst. I can't wear a hat because it flattens my hair, so my scalp burns,' I explained.

It felt good to open up, and even better to see the results of the treatment, which I got redone every six weeks. No more gleaming white patches.

I even managed to grow enough hair to wear it up with a hairpiece on my wedding day to Neil — but it was still very thin at the front.

But on hot days, I worried the product would run as I sweated. Sometimes it trickled down my forehead and I’d have to dash to the bathroom to mop it up. It took away from my enjoyment of summer holidays or special occasions.

Then one day Kate announced she was getting married in July.

I was filled with dread. What would I do with my hair?

'Don’t worry, we can get hair extensions,' she suggested.

'I can't, Kate,' I said. I let my hair down so she could see just how thin it really was.

I told her there was a permanent hair-loss solution at the salon. It was a breathable mesh that was integrated into your hair, without the need to cut any off. But it cost around £2,500, with a further £90 every six weeks for retouches, which is why I hadn't gone for it.

'I think you should, Mum,' Kate said softly.

With that, I suddenly felt like a load had been lifted.

I began saving, counting down till I could afford it.

On the day, I felt nothing but excitement. I was more than ready to say goodbye to my thin hair.

The process took nine hours, but the girls at the salon were lovely and kept me distracted with cocktails and chocolate bars.

When I saw my new locks, I cried. It finally like I was looking at myself for the first time.

I walked out of that salon feeling like the real Jacqui Pulling.

Neil and my family couldn’t believe the change in me, physically and mentally. I finally felt free.

Now when I see other women with hair loss, I'm sad for them.

I know what they're going through and I want to tell them there are solutions.

Some people might feel funny not having their own hair on their head, but I can tell you, this hair feels more like mine than my real hair.

I know we all have our battles, and hair loss might not seem as serious as others. But I was so unhappy, and this has improved my life immeasurably.

I finally feel beautiful — and you can't put a price on that. 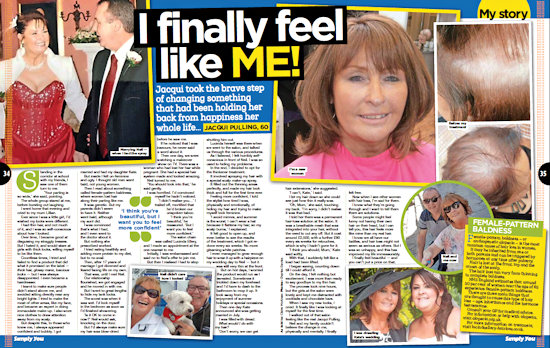