For years, Wendy Jordan, 41, from Glasgow, still bore the scars of what happened to her as a child

Read the article from Pick Me Up below 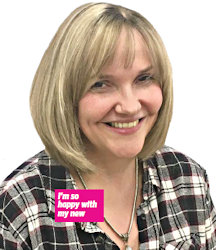 For years, Wendy Jordan, 41, from Glasgow, still bore the scars of what happened to her as a child

As I snuggled down under my duvet and relived the day‘s horrible events, I began to play with my hair. At 9, I‘d suffered a day of torment at the hands of bullies at school.

Not unusual for me... Since moving schools, I‘d struggled to fit in, was teased for having a different accent.

That day, a girl had dragged me to the ground, brutally ripping out a chunk of my light-brown hair.

I hadn‘t dared tell a soul.

Now, thumbing my sore, bald patch and a few remaining wisps of hair, I couldn‘t stop fiddling, until a searing pain shot through my scalp.

Looking at the strands I‘d pulled out, an odd sense of calm swept over me.

From then on, whenever things got tough, I fiddled for a strand, yanked it, stared at it, rolled it between my fingers...

A ritual, but one that brought me shame as well as relief.

Surely no-one else did this..?

Hiding the hair I pulled out, I stuffed it into my teddy or flushed it down the loo.

For two years, I hid the bald patches by tying back my hair but , one day at the swimming pool, my mum, 40, gasped.

’What‘s happened to your hair?‘ she said, looking horrified.

She took me straight to the GP, who reckoned it was alopecia, caused by stress.

I hated lying to Mum, but couldn‘t admit that I was responsible.

The bullying stopped when I moved to secondary school, and I wore a long, brown wig.

But, now that my real hair was covered, I yanked it as much as I wanted.

Years passed, and I continued to pull. At uni in 1996, I was watching Richard and Judy when someone called the show to admit she pulled out her hair compulsively.

’This is trichotillomania,‘ said the specialist guest.

Shocked, I listened as she explained that the rare condition was a form of selfharm that caused sufferers to obsessively pull out their hair.

I wasn‘t the only one! I started laughing. ’Are you OK?‘ asked my housemate.

’I know what‘s wrong with me!‘ I bellowed.

Knowing I had a condition, I focused on getting treatment, but my happiness was short-lived.

Trich couldn‘t be cured with a magic pill or a snap of the fingers.

Officially diagnosed, I tried hypnotherapy and anti-depressants, but nothing worked.

Aged 20, I finally found the courage to tell my parents.

They understood why I‘d kept it to myself all these years, but felt desperately sad.

The obsessive pulling had plagued my childhood, followed me into adulthood, and next, into motherhood.

After my son arrived in August 2007, I vowed never to pull in front of him, but as he grew older, he knew I wore a wig, accepted it as part of me.

Although I married my wonderful partner Robin, 41, in June 2016, I still struggled with my self-esteem.

Last year, a friend introduced me to a university lecturer, another trich sufferer.

She invited me to take part in a medical study and speak about my experience at a psychology conference.

Though nervous, I agreed. I‘d never made my condition public, only telling a handful of close friends and family, but I felt it was time.

Last year, I nervously shared a post on Facebook, explaining my condition and all that I‘d been through.

The outpouring of love and support was overwhelming, and I was so glad I‘d had the courage.

I had no idea, one person commented.

You‘re so brave for sharing, said another.

Others just told me they loved me.

’Is there nothing we can do?‘ asked Mum, calling the next day.

’Well...‘ I began. I explained about Lucinda Ellery, a consultant offering revolutionary treatment to women who‘ve struggled with hair loss.

I‘d always dismissed it, knowing her clinic was in London and I couldn‘t afford it.

Amazingly, Lucinda Ellery now had a clinic nearby in Edinburgh!

Mum kindly offered to help me with the £2,000 cost, and I booked in for an Intralace treatment in April this year.

The procedure involved placing a mesh containing human hair between the scalp and existing hair to encourage growth.

It wasn‘t a cure, but it would effectively disguise my hair loss.

Looking in the mirror after it was finished, my eyes stung with tears. The hair system was incredible, you‘d never know it wasn‘t my own.

Since then, I haven‘t looked back. My confidence has soared, and I love being without my wig.

He loves rollercoasters more than anything, but I‘d always worried about my wig falling off!

This summer, I took him to Alton Towers, and went upside-down on all of the rides without fear.

Since having the treatment, I‘ve drastically reduced my hair pulling, as the Intralace creates a barrier.

I also use a special necklace – designed by Lucinda Ellery, too – that acts as a reminder not to pull my hair.

I hope that sharing my experience will encourage other trich sufferers to be brave and ask for help. I only wish I‘d spoken out sooner. 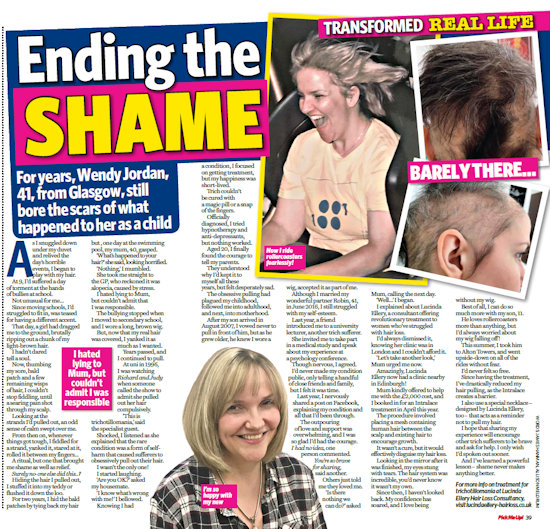