Pulling my HAIR out

That's Life's Your Health page for April 2016 features Charlotte's story of how she reacted to losing her father by pulling her hair, and how she's now dealing with that problem. 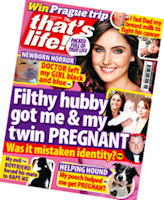 Charlotte was consumed with grief, and found comfort in an unusual way...

I stared vacantly out of the car window, unable to shake a dreadful thought... 'Mel,' I said turning to my older sister. 'Is Dad going to die?'

She look at me and her eyes welled up.

For as long as I could remember, Dad had been poorly. He'd been diagnosed with skin cancer just after I was born, and over the years it had spread.

On my 12th birthday I got up early to open my presents before school. Only, Dad was in a hospice now, and it didn't feel right celebrating without him.

But when we saw him it was clear he didn't have long left. I held his hand as he passed away.

Back home I fell apart. I couldn't sleep, and one night I started curling my long brown hair round my finger for comfort. Then I had an urge to pull.

The hair came out in my hands, and for a second I felt pure relief. The sharp twinge distracted me from my grief.

After that I began pulling my hair out most days. Soon I had to wear a beanie to cover my bald patches.

One day when I was 13, Mum caught me without it on.

'Charlotte, what's happened to your hair?' she fretted. 'Nothing,' I scowled.

She was concerned, and took me to see a therapist. But I refused to open up. It would've meant talking about Dad, which was too painful.

Years passed and I continued to pull my hair out. Then one night I started watching a documentary on TV about trichotillomania. It's a condition where a person feels compelled to pull out their own hair.

The cause is unknown, but it's often a sign of emotional distress.

'That's what I have!' I told Mum. I booked an appointment with a hair loss expert, Lucinda Ellery.

'How old were you when it began?' she asked gently.

'Twelve,' I replied. 'It was just after Dad passed away.'

Lucinda suggested the best option would be an Intralace hairpiece. It's integrated into your existing hair, and its breathable mesh gives your own hair a chance to regrow underneath.

After she fitted it, I couldn't believe my luscious locks. Suddenly I had my confidence back!

While it wouldn't cure my condition, it would stop me from pulling out my real hair.

Now I feel in control of my trichotillomania.

I still wear the Intralace out of choice, and my hair is growing back every day.

Dad would be proud. 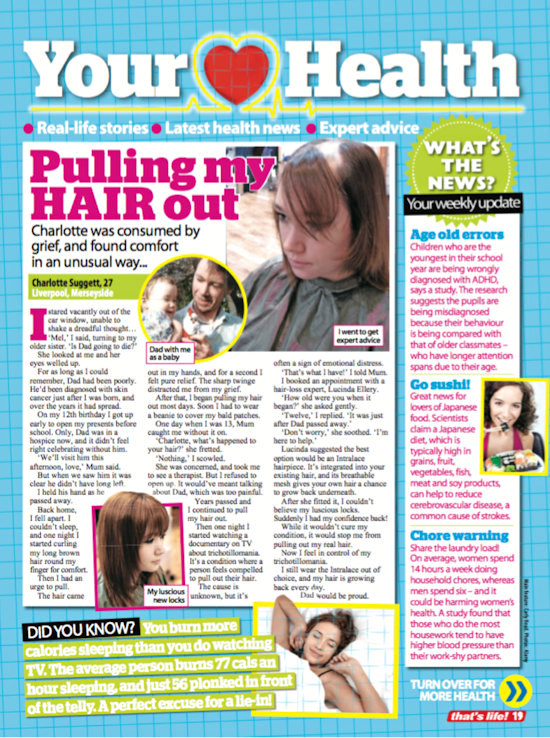