Change Your Life in a Year

A year ago Charlotte Endacott was almost bald due to alopecia and feeling very low. Now she tells Easy Living how her life has turned around and she’s happy again. 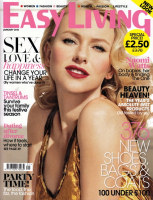 Change Your Life in a Year

“I found confidence after a ten-year battle with apocecia”

“It‘s hard to believe I started the year almost bald. When drying my hair after a shower ten years ago, I felt a bald patch at the back of my head. Within six weeks I had only a patch of hair the size of a grapefruit. Doctors diagnosed me with alopecia areata and, over the next few years, I saw dieticians, dermatologists and acupunctuarists, trying every treatment from pills to Chinese medicine. People ignored or patronised me, and I felt like a freak.

When my father died in 2007 - the same year I fell pregnant - the condition peaked. I’d landed a huge acting part in The Mousetrap in London’s West End, so I bought a wig to wear on stage. But in 2009, another director wouldn’t cast me because of it. My confidence shattered and I quit acting

My sister then heard about The Lucinda Ellery Clinic, which offers hair loss treatments. Lucinda suggested an Intralace System: a permanent mesh with panels of real hair sown in. It would look natural, but at the time I felt too low to try it. However, two years later, having broken up with my partner, I was ready for a fresh start, so I booked an appointment. The treatment took eight hours and afterwards I looked at my new long red hair and burst into tears. I walked out the door with my head held high for the first time in a decade.

Now my confidence has been transformed. I’ve started dating and even signed up for acting classes. Although I still have alopecia this hair feels like it’s mine. Sometimes I wonder why I didn’t have the treatment sooner, but this was obviously supposed to be my year. And it’s been my happiest in a long time.” 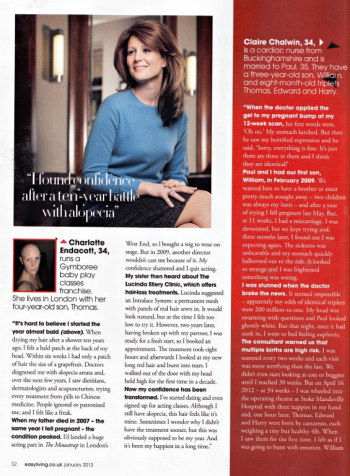