‘We can’t stop pulling our hair out’

India Barnes and Charlotte Suggett both suffer from Trichotillomania and turned to Lucinda Ellery for help. Here they talk to New! magazine about how they started pulling their hair, how it affected their lives, and how they’re now moving forward. 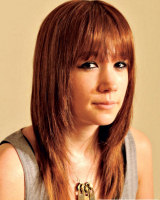 ‘We can’t stop pulling our hair out’

From expensive hair extensions to the latest shampoos, there is no doubt that most of us spend a lot of time and effort perfecting our hair. But for sufferers of trichotillomania, or TTM, they have to fight the urge to ruin it – by pulling it out at the root. Four per cent of people in the UK suffer from the compulsive disorder and feel the urge to pull out their hair, or yank at it subconsciously. Sufferers will often be left with bald patches, missing eyelashes and eyebrows, or even end up with no hair at all. The disorder has been linked to trauma and stress, but sometimes it can develop for no apparent reason. Experts believe that hair-pulling might be addictive, as it is associated with a cycle of rising tension and subsequent relief. Celebrity sufferers of trichotillomania include TOWIE’s Sam Faiers, who recently told fans about her compulsion to pull out her eyelashes, and Hollywood actress Olivia Munn, who has also admitted to pulling her eyelashes out. To mark the new awareness event, National No Pulling Week, which launched on September 17, New! speaks to two sufferers of the painful condition…

‘When I pull out my hair, I am almost in a trance’

India Barnes, 22, is a dance student from Hebden Bridge, West Yorkshire. Her hair-pulling started as a habit.

I was just 12 years old when I first started to pull my hair out and, unlike other people, there was no real reason behind it. I was such a happy child – confident and outgoing, with a close-knit family around me as well as plenty of friends.

I can remember looking in the mirror one day and noticing a bald patch the size of a 10p piece at the front of my hair and really freaking out. I ran downstairs to tell my mum, concerned that I might have had some sort of awful disease.

‘You do fiddle with your hair a lot, India,’ Mum replied, after looking closely at the patch. ‘I think some of your hair’s come out.’

I had a lot of nervous energy and very rarely sat still, so I think the urge to fiddle with something came when I was watching the TV. I guess I sort of went into a trance.

During the following days, my mum was having to continuously stop me from pulling my own hair out – something that I hadn’t even acknowledged I was doing.

I was absolutely mortified and, from that moment on, refused to discuss it with friends or family, despite the fact that my bald patch was getting bigger.

Mum looked on the internet and got me some things as a means of distraction – like a little ball with fibres on it that I could pull, then special gloves to stop me pulling, but I always found a way.

By the time I was taking my GCSEs, I had lost a fair amount of my hair. The stress of the exams meant I would pull out full clumps at a time and it got to the stage where I was totally bald at the top. My close circle of friends knew and they were really supportive, and I had boyfriends who were accepting but, personally, I hated the way I looked. I am a very girlie girl and always wore a perfect face of make-up. But my hair was ruined and I used to sob when I looked in the mirror.

I used to wear lots of headbands and was forced to scrape my hair up in a big bun wherever I went to cover the patch at the top. I could tell that people were staring, wondering if I was ill.

It was only when I saw a TV show about girls with TTM that I found the courage to get proper help with my condition last year. I went for treatment at a salon run by a lady called Lucinda Ellery. She designed a weave that gave me an incredible head of hair that feels and looks totally real.

I still tried to pull out my hair underneath the weave, so I now have behavioural therapy too, where they teach distraction techniques and ways of taking note of the extent of the pulling, which seems to be working. I am now at university, studying dance, and I hope I can soon overcome the compulsion for good and perform on stage with the confidence I wish I had.

‘My dad’s death from cancer led to me developing trichotillomania’

Charlotte Suggett, 23, is a retail assistant from Liverpool. She started to tear at her hair as a coping mechanism after her dad passed away on her 11th birthday…

My dad died of cancer on my 11th birthday and, naturally, I was totally devastated. While I can’t remember a lot from that time, what I do recall is the pleasure and release I found from pulling my hair at the scalp.

My sister Eleanor, now 27, developed anorexia at the same time, so there was a lot going on at home for me. I believe it was a coping mechanism.

At that age, I didn’t realise how serious the implications of pulling my own hair out would be. I was quite openly doing it and wasn’t ashamed of my bald patches. I would start with a few hairs a time and then I would move on to pulling out quite a significant patch of my hair.

A girl at school who had leukaemia even came up to me and said she understood what I was going through – she had assumed I too was having treatment. I felt too ashamed to tell her I was doing this to myself and, unlike her, I could probably prevent my hair loss.

I was lucky that I didn’t get bullied and I had really good friends around me, but Mum worried about me a lot. She was grieving herself and I don’t think she knew what to do to help me or stop me.

I tried counselling when I was 14 but I wasn’t willing to give it my all, so I stopped going. Doctors didn’t really know what to do, so I started to think I was just going to have to accept my bald patches.

The older I got, the more I pulled my hair as life became more stressful, and dealing with Dad’s death was still a chore. If I was stressed in any other way, the pulling would become even worse.

For the last ten years I had a comb-over, as I would have to brush a piece of my hair over the huge bald patch at the top of my head. As I had always wanted a career in fashion, it wasn’t a good look and I could feel the stares when I went for interviews after leaving school.

Until recently, I was in a relationship with Daniel, 23. He was one of the only people I felt brave enough to show my patch to. He was supportive, but he’d say he wished I wouldn’t do it. When we split, it made the problem worse because I was so stressed. As a result, I’ve found I have to be careful with relationships as any stress can make the problem worse.

After getting the courage to move to London last year for an internship, my mum read about Lucinda Ellery’s Hammersmith salon, where they specialise in hair loss. I was so stubborn at first – I didn’t want to face up to what I was doing. But when I met Lucinda, she really understood what I was going through. She was one of the first people who I’ve let see my bald patch in all its glory since I got older. I had one-to-one counselling and, with a weave created using her Intralace system, I now have a full head of natural hair.

I have now got a job working for Harrods, where presentation is everything – something I would never have got if I still had a bald patch. I still get the urge to pull out my hair but I’m definitely on the way to recovery. 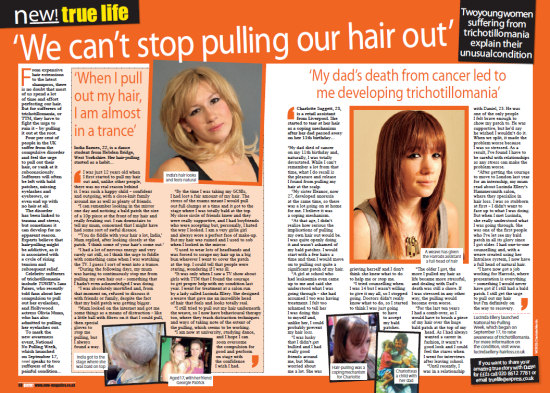