Fiona Macdonald-Smith speak to experts in hair loss and nutrition as she investigates the causes and possible solutions for the increasing number of women who are losing their hair, and discusses the effects with Lucinda 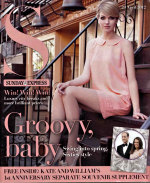 Baldness isn’t just a male problem. More and more women are facing up to thinning locks – so can anything be done? Fiona Macdonald-Smith reports for S magazine

For Polly, it was noticing that her ponytail was half the size it used to be and her hair clips wouldn’t stay in. For her sister-inlaw Lindsay, it was seeing how full of hair the plughole and her hairbrush suddenly were. And for her friend Tessa, it was the awful moment when she looked at a family photograph and saw that her parting was no longer a thin line down the middle of her head.

“It was more of a wide pink stripe,” says Tessa. “I found that, even when I changed where I put the parting, it was still a stripe rather than a line.” More middle-aged women than ever are facing up to hair-loss. And it can be deeply distressing. “I can’t tell you how many of my friends are worried about losing their hair,” says Polly, a 43-year-old designer and mother of three, whose hair has thinned drastically in recent years. “I can honestly say I worry about my hair every day. I’ll spend ages standing in front of the mirror, trying to blow-dry some volume into it. I never wear it down now. Every woman I pass when I’m cycling back from the school run, I’ll look at their hair. A thick head of hair is such a youthful thing. I really, really miss it.”

Hair loss, medically known as alopecia, used to be thought of as a male problem, but not any more. Even celebrities aren’t immune – Nigella Lawson was recently photographed with what appeared to be a bald spot on the back of her head; actress Selma Blair has confessed to losing a lot of hair after the birth of her baby Arthur, and last year Coleen Rooney was photographed with bald patches, said to be the result of her hair-extension habit.

“Female hair loss is definitely becoming more common,” confirms GP Dr Sarah Brewer, who reckons around 20 per cent of women in the UK have a clinically significant problem. Around two-thirds of these have female pattern baldness – overall thinning of the hair caused by hormones, ageing and genetics – which becomes increasingly common after the age of 40 and can accelerate post-menopause.

And there are numerous reasons why the other third lose their hair. “In one in five cases there is a family member who has also suffered from alopecia, suggesting there may be a genetic link,” says Dr Brewer.

In other cases, a loss of hair has been linked with stress. “Some women have an impulse control disorder called trichotillomania, where they pull out individual hairs, often absent-mindedly,” explains Dr Brewer. “This can be linked to stress and it is thought to affect at least one million women in the UK alone, although few of them seek medical help.”

But nutritional imbalances are also a big culprit, so there’s a lot we can do to help ourselves.

“Your hair needs a good, balanced diet,” says Marilyn Sherlock, chair of the Institute of Trichologists. “One of the most common causes of female hair loss is being low in a form of iron called ferritin.”

This is found in red meat, dried fruit, eggs and dark green vegetables – omit any of these from your daily diet and you could begin to notice the consequences.

“Crash dieting is a big cause of hair loss,” she adds. “With the Atkins diet, for example, you may be eating a lot of red meat but you can’t necessarily absorb it because it needs to be eaten with other nutrients.”

Polly has changed her diet and has been taking iron supplements, too. She has also sent off for minoxidil online, a topical lotion used to treat male pattern baldness, which can also help women. The one thing she hasn’t done is see her GP.

“I’m too embarrassed to have someone look at my scalp that carefully,” she explains. “And it would make me officially ‘a woman who is losing her hair’. ‘Besides, there’s nothing they can do.”

Fortunately, that is not strictly true. “If you notice hair loss, it is important to seek advice from someone experienced in assessing the condition,” says Dr Brewer.

“A general medical check-up will help to identify any underlying hormone conditions or other causes such as anaemia.”

A nutritional assessment is a good idea too, as it might pinpoint dietary deficiencies, while a lifestyle assessment could help manage excess stress. your GP can also prescribe minoxidil, although only one in four women respond to the lotion, which takes at least four months to show an effect. Dr Brewer does admit, however, that while GPs are sympathetic to hair loss, many don’t know what can be done about it. Some are simply likely to suggest wearing a wig.

Which is where a remarkable woman called Lucinda Ellery can help. She sees more than 2,000 women every year at her specialist hair-loss salons in London and Manchester, and she believes she can help everyone in some way. There is advice, support and a range of treatments, including a unique “hair-prosthesis” system that costs around £1,800. With this, hair is attached using a mesh and a complex plaiting system. It looks completely natural and you can wash it, sleep in it and forget about it.

Having lost her own hair at the age of nine after the death of her father, Lucinda has owned 120 wigs in her time and understands just how catastrophic hair loss can be for women.

”I had one client who didn’t even think about her dress for her wedding day,” she recalls. “She was too busy worrying about her thinning hair. But when her husband saw her after she’d been here, they were both so happy with the result that they burst into tears.”

“You can’t underestimate the affect hair has on people,” adds Lucinda. “There was a study by Yale University that showed people make up their minds about each other in three seconds flat – primarily through their hair.”

“Clients say to me, ‘I hope I don’t appear vain, worrying about this so much.’ And I say, ‘You’re so worried about losing your hair that you’ve come to get help – where’s the vanity in that?’”


How to feed your hair

“For healthy hair, it’s essential to have a varied, balanced diet,” says nutritionist Vicki Edgson. “Eat plenty of raw or steamed green vegetables, which are rich in iron.” Vicki also recommends juices made from rocket, watercress, spinach or parsley, mixed with apple juice to make them more palatable.

“Adults don’t absorb vegetarian sources as well as children do,” Vicki adds. “So if you’ve been cutting down on red meat and have noticed hair loss, reintroduce iron-rich fillet steak, lamb or even calves’ livers into your diet.” Just once or twice a week will make a difference.

Wheat germ and vitamin E are equally important, and are found in abundance in oily fish and avocado – an excellent hair food.

Your hair also needs essential fatty acids. “If you suddenly lose a large amount of hair and you’ve been on a strict diet, this may be because you are not eating enough fats,” says Vicki. She recommends mixing a daily tablespoon of hemp or pumpkin seed oil into a salad dressing. Again, oily fish is a great source of fatty acids. For a real “hair feeder”, mix a tin of sardines with lime juice, black pepper, a couple of teaspoons of crème fraîche and a few raw crudités on the side.

Don’t forget the B vitamin biotin, which is important for strengthening your follicles. Eat plenty of quinoa, rye bread and rye crispbread such as ryvita. For more nutritional advice, see www.vickiedgson.com.

Hair loss can sometimes result from medical treatments, including chemotherapy, and fungal skin infections. It is also more common in people with thyroid problems, diabetes or vitiligo, and other hormone imbalances associated with obesity, polycystic ovaries, pregnancy and menopause.

Around 10 per cent of hairs are in telogen at any one time – these are the hairs that fall out when we wash or brush our hair – and losing up to 200 hairs a day is normal. However, some women experience heavier hair loss, caused by a subtle change in the hair-growth cycle – a process called telogen effluvium. This causes large numbers of hairs to shed suddenly. Classic triggers include falling hormone levels after giving birth, stopping usage of the pill, stress, surgery and severe illness. Hairs tend to start falling out six to 10 weeks after the trigger, but the good news is that women with telogen effluvium should make a full recovery without medical help. 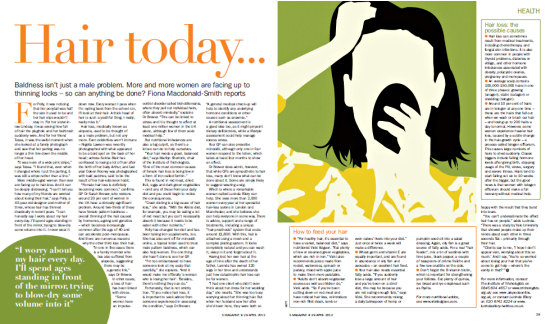