Mum Lisa Fleming says a revolutionary hair system has given her the mental strength to fight cancer. 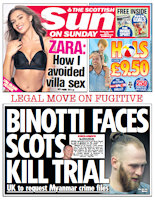 Mum Lisa Fleming says a revolutionary hair system has given her the mental strength to fight cancer.

The 34-year-old was left distraught when she was diagnosed with an incurable form of breast cancer.

And the thought of losing her hair through chemotherapy added to her anguish as she didn’t want her son Cameron, five, to see her looking ill.

Lisa, of Colinton, Edinburgh, says: "As a woman, one of the things I struggled with most was the thought of losing my hair."

"My wee boy is autistic and I didn’t want him to see mummy in another way than I looked before cancer — he would really struggle with that."

One of Lisa’s nurses, who previously had cancer, told her about the Lucinda Ellery clinic which specialises in hair loss treatments for women.

Courses start at £750 — but Lisa and solicitor husband Cameron decided the cash was worth it. The system works by pulling the existing hair through a paper-thin mesh then attaching extensions to the strands. Lisa added: "I went for a consultation in Edinburgh. They told me they would keep me looking like me and that I was just to concentrate on fighting the cancer."

"There was a financial implication with getting the hair system but we decided as a family that having hair and being able to still look in the mirror and see Lisa rather than cancer gave me strength."

"I then found out the cancer had spread to my brain and I had to have surgery. It meant I had a scar from one end of my head to the other."

"The girls at the clinic worked out a way to clip the hair on so, if I was going out, I could put it on. They still managed that promise of making me look like me."

Lisa faces at least three more ops and more chemotherapy, but she said: “To look at my wee boy, the fact that he's not distressed at having to look at Mummy without hair or with the scar, has helped a lot in a really bad situation.” 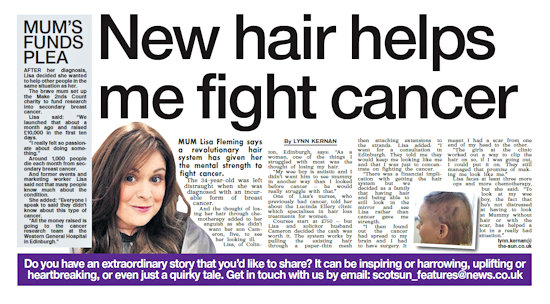