The Sunday Express have now written a follow-up piece on Katie's excellent progress which can also be read below. 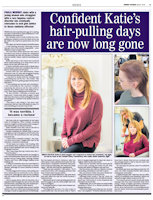 WHEN she had a bad fall at the age of 15, leaving her with a scarred face, Katie Hawthorne’s self-confidence also took a hit.

She initially tried to hide behind her hair, pulling the strands to cover the mark on her top lip, before she started to pluck them out of her head.

The signs she had developed trichotillomania - a hair-pulling disorder affecting around two per cent of the world’s population - were difficult to spot to begin with.

The teen chose areas above her ears and at the back of her neck to satisfy the compulsion but eventually the hair loss became so evident that her mother, Hazel, realised something was wrong. 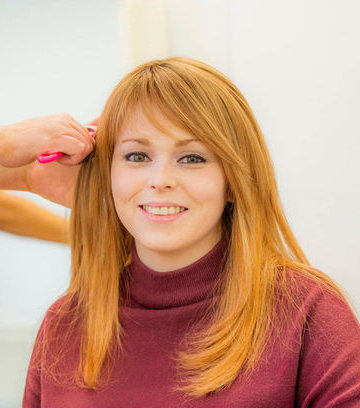 Katie had been to the doctor but received little understanding as to what drove her to pluck out her hair and chew on it.

It wasn’t until after mum-of-three Hazel saw a documentary about the condition that all the pieces of the puzzle fell into place.

Armed with the new information, Katie returned to her GP, who still struggled to grasp the concept and offered her counselling.

“I am sure it would work for someone but counselling was not for me,” she recalls. “My condition had been getting progressively worse and worse.”

“I was pulling out my hair and chewing it. I was searching for the coarsest strands, repeating the process all the time until it became very obvious that I was doing it in excess. There was no hiding from it in the end.”

“It was terrible. I became a recluse and depressed. I would only work at night, I would not leave the house or risk coming face to face with strangers. I wouldn’t even speak to them on the phone.”

“The more I was doing it, the more self-conscious I felt but I also felt unable to stop. It’s not something you can just stop at will.”

She took a job at a supermarket in her home town of Livingston, West Lothian, stacking shelves at night to avoid contact with strangers, and refused to go out with her friends.

Katie wouldn’t even call a taxi as she felt so self-conscious about her appearance.

Despite realising she needed help, it took an emergency trip to hospital in 2015 before the now 26-year-old understood she was putting herself at risk.

“I had severe stomach cramps,” she says. “As there were fears I might have hair in my stomach, I needed an endoscopy.”

“It did make me realise I am dealing with a potentially fatal condition because you can go on to have hairballs that can be deadly if not surgically removed.”

“But I was lucky that my results were fine. I was in the clear.”

Around 840,000 British women are thought to have trichotillomania which has been featured in films such as Young Adult, starring Charlize Theron, and Terri, with Bridger Zadina in the leading role.

A string of celebrities have also been linked to the illness, from Justin Timberlake to Kristin Stewart, although it is more common in women than men.

Usually triggered by trauma, hair pulling was first mentioned by Artistotle in the fourth century BC, although the name for the condition was not coined until the latter part of the 19th century.

Like so many others with the disorder, for a long time Katie thought she was on her own with her obsession, especially since the medical profession seemed to know so little about it.

However, she eventually came across Lucinda Ellery’s hair loss clinic and drummed up the courage to make an appointment in Edinburgh. But she bailed out from it. However, after her elder sister Louise admitted how upset she was about Katie’s compulsive behaviour and promised to help her financially, she contact the clinic again – and this time kept the appointment.

“That was last summer,” she smiles. “If I’d understood what a life-changing decision that was, I’d have done it years earlier.”

“It made an instant difference. My mum burst into tears when she saw the results because I looked normal.”

“My friends threw a hair-growing party for me and I’m happy to go out, meet people and even chat to strangers.”

“I changed my job so I have more human contact in my daily life.”

“Through this process I’ve also come to understand that I am not alone with it. That’s why it’s hugely important to share the story, to support others in the same boat.”

Katie had an Intralace System mesh placed on her head, costing just under £2,100, with human hair added to disguise any hair loss.

But the device also acts as a barrier to deter hair pulling, allowing her own hair to grow. She can remove it after two years should her hair growth resume to normal levels.

Although Katie needs a “top up” every six weeks, costing around £120, she said the money spent was “well worth it” as the treatment has returned her lust for life.

Additionally, she is now active on social media speaking to others in a similar position and raising awareness.

“The worst thing is you think you are on your own,” she explains. “To know someone else has been there, knows what you are on about and has perhaps found a way to stop the cycle can make all the difference.”

“If I can help one person, then I’ve achieved something.”

Ms Ellery has been operating around the UK since the 1980s helping women with natural looking hair restoration.

A spokeswoman said: “Hair loss, due to a wide variety of conditions and situations, affects an estimated eight million women in the UK.”

“Our team is proud to assist women like Katie manage hair loss and transform their lives using a range of highly specialist solutions, including our pioneering Intralace System.”

Katie: Every day is a good hair day now

A SCOT with a rare impulse control disorder is on the road to full recovery – just months after the Scottish Sunday Express first told her story.

Katie Hawthorne developed trichotillomania, a hair-pulling compulsion affecting around two per cent of the world’s population, following a fall at the age of 15. Eventually her hair loss became so evident her family begged her to seek help.

Initial contact with a GP yielded no positive results but, once the now 26-year-old’s mother Hazel saw a documentary about the condition, all the pieces of the puzzle fell in place and she discovered she was not on her own.

She sought treatment at Lucinda Ellery’s hair loss clinic in Edinburgh and just a year on the results are startling.

Ms Hawthorne, of Livingston, West Lothian, had an Intralace System mesh placed on her head, costing just under £2,100 with human hair added to disguise any hair loss. It also acted as a barrier to deter hair pulling, allowing her own hair to grow back.

She said: “It is incredible.I thought it would take at least two years but when the mesh was removed there was lots of my own hair underneath. I thought there would be some because of the heat, but the amount came as a total shock as it was a year on Friday that the mesh was first put in place.

“What I need to do now is to keep this frame of mind where I don’t pull at it. I still chew the end bits but it’s a habit I will have to break.

“But I’m not pulling any more. However, they are keeping my hair piece in case we need to put it back at some point and I’ve check-ups every six weeks to see how it’s all going.”

Around 840,000 British women are thought to have trichotillomania, which has been linked to celebrities such as Justin Timberlake and Kristin Stewart.

Usually more common in women than men, it is often triggered by trauma.

Ms Ellery has been operating around the UK since the 1980s, helping women with natural looking hair restoration.

She said: “We are delighted to see the fantastic progress Katie has made in such a short period of time. Well done, Katie.” 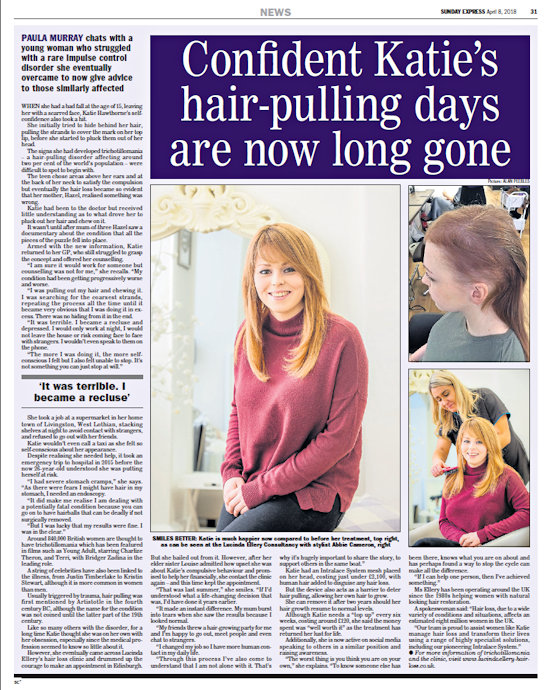