‘If you are fighting for life, who cares about hair!’

We were recently happy to be able to help Jacquie Beltrao, well-known from her role with Sky Sports, in dealing with the hair loss caused by her chemotherapy treatment. She was interviewed by Best Magazine where she discussed the experience of being diagnosed with breast cancer, the successful treatment, and her return to work.

Read her interview below or download a pdf of the article 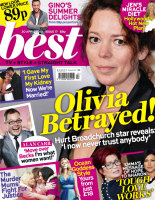 “I wanted to be on centre court when Murray walked out – happy and excited,” she explained. “It’s been such a horrible year and I need to feel normal again.”

Since last Christmas, the 49-year-old’s life has been dominated by breast cancer. Here she tells Best about discovering the lump, when she told her children and why life after the ’all-clear’ couldn’t be sweeter…

How did you find the lump?

Two days before Christmas. As I went to bed, I felt a very tiny pea-shaped lump on my right breast. My first thought was – cancer. I was terrified.

What went through your mind after that?

I’ve always had a fear of dying young. My favourite aunt, Trisha, died at 45 – five years after she was first diagnosed with breast cancer – and my mum Kay died when I was 18 from a heart condition. I showed my husband Eduardo, but because I can tend to think the worst, he told me not to panic until I’d seen a doctor.

My best friend Joanna is a breast cancer nurse and used to work for a fantastic surgeon called Mr Sharma, so I made an appointment at once. Then I rang my GP and insisted on a referral letter. Unfortunately, Mr Sharma couldn’t tell us anything without a biopsy or a mammogram, but he did take some cells from the lump and sent them off to the lab – along with a blood test – telling me to come back the following day.

It was now Christmas Eve…

Yes. When I returned the following evening, Joanna came with me, so she could ask questions if the news was bad – it was. I had cancerous cells, but Mr Sharma couldn’t say what I was dealing with until all the lab results were in, and that wouldn’t be for days. It was dream-like. I told Eduardo and my sisters – Susan and Lorraine – but we decided not to tell my children – Amelia, 16, Tiago, 13, and Jorge, 12. There’s no point telling kids half a story, and I didn’t know how big or aggressive the cancer was, or if doctors could fix it.

How did you feel?

Angry! My mum and aunt had died young and I felt as if history was repeating itself. I was p***ed off!

When did you get the full diagnosis?

Just before New Year. It was a grade two tumour, but hadn’t spread to my lymph nodes. Eduardo and I almost skipped out of there. The news could have been much worse, so we decided to throw a party! That’s when we told the children.

How did they react?

They were upset at first – Jorge cried. He even followed me about for the first two weeks, asking if I was OK. But at least I knew what we were dealing with by then.

Two weeks later, you had a mastectomy…

Yes – I had a mastectomy and a boob job, on 14 January. I went from an A cup to a C. I’m much happier when I look in the mirror now. It’s been an odd bonus!

Why did you opt for chemo if the cancer hadn’t spread?

Because of the type of tumour I had, my oncologist explained it would be a ‘belts and braces’ insurance policy – if any cells had escaped, chemotherapy would kill them. I had my first session on 29 February at Parkside hospital in Wimbledon, my last on 23 May.

You haven’t lost any hair…

Well, I have. I stuck with the cold cap (a way of cooling the scalp that may reduce hair loss) during treatment because I didn’t want to lose all of it.

Before I went back to work, I had what’s called Intralace hair replacement with Lucinda Ellery, who also works with the Katie Piper Foundation. For £2,300, it was a bit like having glorified, expensive extensions – but I’m thrilled with it. If you’re fighting for your life, hair is the least of your worries, but if you’re not, it’s the one thing most women get very upset about.

Who or what really helped you pull through?

What about Eamonn and Ruth?

[Laughs] Yes. They came to the hospital. Eamonn was taking selfies with the nurses and chatting about his hip problems. I had to say: ‘Excuse me, I’m the patient!’

You’re back at work just a month after your last treatment. Is that tough?

I’m not working every day until I feel well enough, and we’ve planned holidays – Menorca with the children in July, then Jersey with a girlfriend. I’m so happy to be out the other side of my treatment that I feel on top of the world. 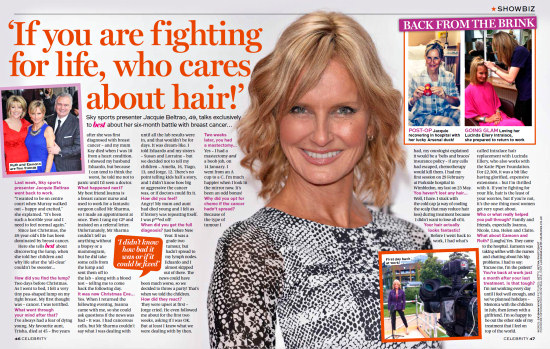