Treating Our Hair Loss was a Huge Confidence Boost

Whatever the reason, loss of hair can have damaging effects on a woman's social, family and business life. Two of our clients tell Woman & Home about their stories and the dramatic improvements they felt after coming to see us.

Read their story below or download a pdf of the article 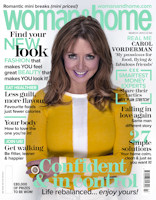 Treating Our Hair Loss was a Huge Confidence Boost

Losing your hair is undermining in so many ways, but two women describe how a specialist treatment gave them back more than their locks.

“I put on a brave face, but there were times my hair stopped me going out”

Louise Byrne, 39, is married to Sean, 36. They live in London with their three-year-old son. Louise is co-owner of La Belle Memoire, a memory book design company.

“Your femininity is bound up in your hair, but you don’t think about it until you lose it. My hair used to be thick and curly, and I was always changing it. I’m a brunette, but I’ve been a blonde and a redhead, and I loved experimenting.

However, during my first year at university, I contracted what I assumed was tonsillitis. I could hardly get out of bed, I felt so ill, and when I saw a doctor, I was admitted to hospital. My throat had closed up and, as I couldn’t take antibiotics orally, I was hooked up to a drip. I’d contracted quinsy, a complication of tonsillitis, where an abscess forms between the back of one of your tonsils and the wall of your throat. I was over the worst after a day or so, but it took me a couple of months to fully recover.

I didn’t notice my hair was thinning at first, but when a fellow student joked that I was going bald, it stuck in my mind. Over the next two months, I became increasingly self-conscious and aware that my hair was becoming especially thin at the crown. I had another attack of quinsy in my second year. I recovered, but my hair worsened. The doctors don’t know if there is a direct link to the illness but one of them suggested that my body took care of the important things at the cost of my hair.

By 1996, when I was working as a PA, worrying about my hair started to affect my life. If a colleague came to talk to me at my desk, I’d immediately stand up so they couldn’t see my crown. I tried different ways of styling it in desperate attempts to disguise the thinner patches. I felt very unfeminine. By now, I had bald patches at the crown and the rest of it had become very fine, baby-like hair.

I’m usually a positive, outgoing person – I studied drama! – but it was chipping away at my self-confidence. I tried to put on a brave face, but there were times when the state of my hair stopped me from going out.

I’d started seeing Sean in 1995, but never mentioned it to him – or anyone. Looking back, I realise it was as if talking about it was admitting I had a problem.

Then one night, about two years into our relationship, I was struggling to do anything with my hair. I was distraught. Surely balding didn’t happen to people my age? I burst into tears and confided in Sean. He was very sweet and amazingly supportive, and we started discussing possible solutions. I’d already found Lucinda Ellery’s salon on the web, and Sean encouraged me to book an appointment the next day.

At first, I had what the salon calls glamour extensions. I couldn’t bring myself to go for the more complex Intralace System because, again, it was admitting that I needed help. The extensions are fantastic and gave me instant volume, but they couldn’t do anything for the area at my crown. So, after about five months, I returned to have the full Intralace System, where strands of your own hair are interwoven with extensions through a mesh. I was terrified I would look like I was wearing a wig. However, after almost nine hours in the salon, I walked out with amazing long, flowing locks.

When I went back to work the following Monday, I held my breath at the possible reactions from colleagues. Yet most people either didn’t notice or asked if I’d had a cut or changed the colour!

It took a couple of weeks to get used to my new look, but as I did, my self confidence soared. I love my hair and can wash it as normal and swim with it. To keep it looking good, I have to have regular appointments, but going to the salon is a real treat. It’s expensive – I set aside more than £100 a month – but I budget for it like any other expense. Anyway, I couldn’t put a price on how it looks and how much better I feel.”

Sati Allen, 43, a graphic designer, lives in Twickenham, Surrey, with her husband David, 37, and their seven year-old daughter.

“I realised my hair was thinning when I kept noticing strands of it in the bathroom sink or on my keyboard at work. It was a couple of years after having my daughter, so I dismissed it as a hormonal phase. But when my mother asked me why I’d become so thin on top, I realised I had to face reality and do something about it.

I felt a first step might be to get fit and improve my general health. I’d been a size ten before having my daughter, but was now a good 14. I swapped biscuits and crisps for sweet potatoes and salads, and worked out at the gym six times a week. However, although I slimmed down, my hair loss stayed the same. In fact, it got worse. I told myself change would take time, but six months later, I was still desperate for a reason why I was losing my hair. I saw a consultant specialising in hormones and had blood tests to check for possible hormonal or thyroid problems. But when the tests all came back as normal, he concluded my condition was hereditary.

This news was devastating – there was absolutely nothing I could do. I felt sad, alone and depressed. It’s normal for a man to lose his hair, but it feels alien and unnatural for a woman. For the next couple of years, my self-esteem plummeted. I removed all the mirrors from the house apart from one in the hallway, and became fixated with women who had thick, glossy hair, especially those older than me. Going to the gym kept me sane and I lived in gym gear. I’d lost confidence in my looks so felt silly dressing in a more girly way.

I made friends at the gym and in the changing rooms one evening, I overheard two women talking about hair loss, and one mentioned Lucinda Ellery. A couple of weeks later, my hairdresser – one of the few people I confided in about my hair – also recommended her. It took courage to book an appointment, but as soon as I walked into the salon, I was so glad I had. It was full of women just like me – suddenly, I realised I wasn’t alone. The Intralace System has given me back a full head of hair that looks like my own.

I booked my appointment to coincide with a holiday to Rhodes so that when I went back to work, my colleagues would just assume I looked better because I’d been away. Before I had the Intralace System, I was so afraid of losing my hair that I would use tiny amounts of shampoo. Now I use all sorts of products and style it every time I wash it. I feel like myself again and I’m no longer afraid to look in the mirror.”

How the system works

Is this your problem? 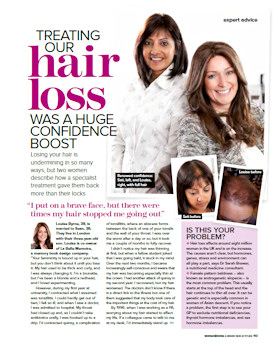 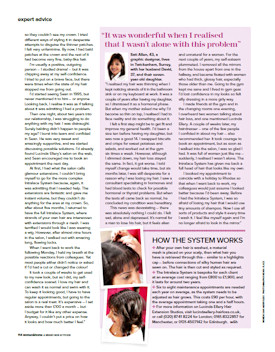