TOWIE’s Sam Faiers recently admitted that she pulls her eyebrows - a form of Trichotillomania. In an article for Now magazine she talks to two fellow suffereres, Amelia Santos Rosa and Leah Brin, about their experiences.

TOWIE’s Sam Faiers recently admitted she has a disorder where she pulls out her eyelashes. In a moving interview, she compares her experiences with two other sufferers.

Fake eyelashes are a staple in any Essex girls’ beauty kit. But, unlike the rest of her TOWIE co-stars, Sam Faiers, recently bravely admitted there’s another reason why she’s rarely ever seen without her heavy false lashes before she leaves her house every day. Sam, 21, has trichotillomania (TTM) – a disorder that causes sufferers to pull out their own hair during times of stress. She regularly pulls all her eyelashes out and has even done this in her sleep at one stage. ‘I’ve done it since I was seven after being told to make a wish as I blew away a stray eyelash,’ she reveals. ‘My dad had gone to prison and “pulling” became a real comfort to me – and it’s been a habit ever since. Now, I don’t have any eyelashes at all.’ And Sam isn’t alone. According to Trichotillomania Support, three per cent of the population habitually pull hair from their head, eyebrows or eyelashes during times of anxiety or stress. Here, Sam talks to two other sufferers about their battles with the impulsive control disorder.

Trichotillomania, or ‘Trich’, sometimes known as ‘pulling’, is a long-term condition where people feel an overwhelming urge they cannot control to pull out the hair from their head, eyebrows or eyelashes during times of anxiety, stress and upset. After the hair’s been pulled, sufferers usually feel a sense of relief.


‘Armfuls of hair covered the floor’

Amelia Santos Rosa, 23, from Manchester, began pulling out her hair after suffering a severe trauma as a child.

Sam: Do you remember when you first started pulling?

Amelia: It was after I was sexually assaulted by a stranger on the way to school when I was 12. He was convicted and sent to prison, but I stopped eating and became dependent on antidepressants. That’s when I began pulling out my hair, eyelashes and eyebrows. But I’ve realised it’s not just the trauma, it’s part of my family history. My mum and sister do it too.

S: How does it make you feel?

A: It used to make me feel a sense of relief, but now I barely realise I’m doing it.

S: I used to pull out my eyelashes in my sleep. Now I do it when I’ve lots on my mind. It’s a comfort, but afterwards my eyes feel puffy and sore. How do you feel after?

A: I feel ugly and remorseful. At times I’ve pulled out every hair from my eyebrows and eyelashes, plus so much from my head, there’ve been armfuls of hair all over the floor. At one stage I shaved every single hair off my body too.

S: I really feel for you. At first I wouldn’t tell anyone at school about it in case they’d think I was weird.

A: My teacher called me “Eyebrows” when he took the register as I didn’t have any and people would yell “Freak” as I walked down the corridors. Most days I’d be in tears. I only began to feel confident when I met Robbie six years ago.

S: My boyfriend Joey has been a real help for me too. He hates seeing me in pain, but makes me feel beautiful without my falsies.

A: I hid it from Robbie for months as I was afraid of how he’d react. When I began staying at his house, I’d get up early to wash my hair and clip in my extensions before he woke up. But I had to tell him when we moved in together.

S: I remember when I told Joey. We were at my mum’s and I was worried it’d be a hard thing for a boy to understand, but he was amazing about it. He’s always been supportive and just wants me to feel happy in myself. How did you feel when you told Robbie?

A: I was shaking when I took out my extensions to show him my bald patches, convinced he’d walk out. But he wasn’t bothered. He said he still thought I was beautiful.

S: How does it affect your confidence in public?

A: I struggle a bit – it’s a very private thing for me. When I was pregnant with our son Ellis, [three], I wanted to go to aquanatal classes but didn’t dare because I’d have to take out my extensions in public. If I’ve had a bad episode where I’ve pulled my hair nonstop, I won’t leave the house.

S: I used to feel embarrassed about it too. Once I wore falsies just to get a pint of milk, but now I feel I’ve come such a long way. Sometimes I’ll just stick my sunglasses on, but the other day I went to a spa with Joey for two days and didn’t wear my eyelashes at all – I didn’t even feel self-conscious.

A: I guess one of my main worries is that my kids Ellis and Leo might pick up on my condition. Before Ellis could talk he’d pull his hair when he got frustrated – but thankfully never pulled it out. I’m very vigilant and hope one day I’ll overcome the problem.

S: When I was 14, I had hypnotherapy and stopped pulling. My eyelashes grew back, but once the treatment was over I started again. I know I need more therapy and want to try again in future.

Leah Brin, 25, from Essex, has been pulling out her head hair, eyebrows and eyelashes since she was 12 and admits it’s put a strain on past relationships.

Sam: What do you pull?

Leah: I haven’t touched my eyebrows for a long time, it’s mainly my hair and eyelashes – but I switch between them. There wasn’t any big trauma or reason why I started and I went to my doctor – but he said it was just a phase. Ten years later I’m still at it!

S: How badly do you suffer with it?

L: It got really bad when I was pregnant with my daughters Tia, [four] and Taliah [two], but I’ll usually do it when I’m alone. Once, I pulled so much hair out I was left with bald patches and had to have it cut short at the hairdresser’s.

S: That must have been difficult.

L: When I saw the patches in the mirror I felt like crying. It’s so frustrating knowing I’m causing this. Nice hair is so important to us girls and I feel ugly when I’ve pulled. It affects my confidence loads.

S: When I was little I had amazing long lashes. My mum even made me wear mittens so that I couldn’t pull them out, but nothing worked. How do you hide the bald patches?

L: I used to wear wigs – I saved up £200 for my first one – but when I look at the pictures, it’s so obvious I was wearing a wig! Now, I go to a specialist hairdresser to have an Interlace put in – a mesh cap that’s attached to my real hair, but the hair extensions are actually attached to the netting, so I don’t pull my real hair out when I tug.

S: Has it boosted your confidence?

L: It has, but I still get anxious when I go out. I always think someone will notice I’ve got bald patches and my eyelashes are missing. Sometimes I can’t even go on a girls’ night out because I’m so envious of my mates’ gorgeous hair and lashes. It’s heartbreaking because I know how nice mine could look if I left them alone.

S: Does it affect your love life too?

L: Yes, I’m single at the moment and I’d love to settle down, but it’s put a strain on past relationships, as I don’t like getting too close to men. I worry that if they saw me without my extensions in, they’d dump me. I find dating really hard.

S: I felt like that, but when I was 16 I decided to stop letting it control my life. Instead of hiding away, I’d tell anyone why I didn’t have eyelashes. Being open and accepting the condition helped – the more we talk about it, the easier it will be for society to accept and understand it – it’s no different to someone who bites their nails!

If you’re suffering from the issues raised here, you’re not alone. Here, hair loss and TTM expert Lucinda Ellery offers her advice if you’re a puller

Trichotillomania can be a form of stress relief, like biting your nails, so we advise relaxation if you’re feeling anxious. Try abdominal breathing by placing one hand over your stomach, breathing in for four seconds and focusing on pushing the air into your stomach as it expands. Repeat until you feel calmer.

Use a distraction method to stop the pattern. Find something to carry around that’ll keep your fingers busy when you feel the urge to pull, such as playing a free game on your iPhone or giving yourself a manicure.

Feelings and behaviour are interconnected. Examining the underlying thoughts behind emotional problems has led to some success with managing Trich (TTM) symptoms and has sometimes helped to diminish them altogether. Visit your GP and ask to be referred for CBT. 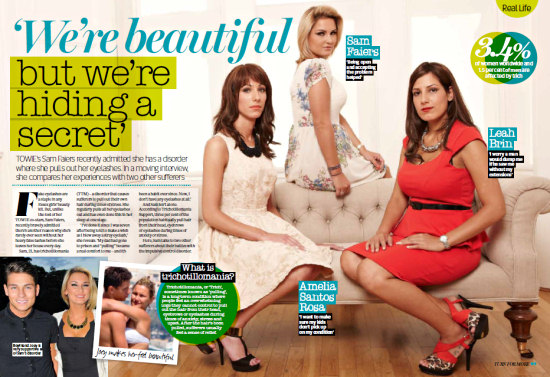