Lynn Crisp is one of three gorgeous finalists in the YOU/Breast Cancer Care model competition. Read her inspiring story of how she recovered from the disease and reclaimed her beautiful appearance, including seeking our help once her hair started to grow back. 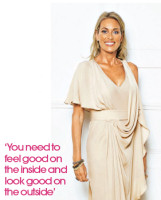 Of the many difficult moments Lynne has faced in the past five years, she is in no doubt which one was the hardest – the evening she had to sit down and tell her two children, Robert, then 14, and Katy, then nine, that she had breast cancer.

‘I knew that they would ask if I was going to die, and I also knew that I couldn’t tell them for certain that I wouldn’t,’ she recalls. With all the calmness she could muster, she explained that the doctors were working as hard as they could to make her better. ‘I remember Katy cried and Robert put his arm around her and said, “Don’t worry – look at Kylie Minogue,”’ says Lynne. ‘Then he turned to me and said, “You’ve never let anything in life beat you, Mum.’’

Robert was right – today his mother couldn’t look more vibrant as she slips into a Caroline Castigliano dress. But Lynne is candid enough to admit that although she may appear swanlike on the surface, she hasn’t always felt so serene inside.

‘Like a lot of women, I’m good at coping outwardly,’ she says. ‘We put on a brave face for the sake of those we love. But today, the face I am putting on is for me. Being here makes me feel that I am finally recapturing the Lynne I always set out to be.’

Now 47, Lynne, a full-time mother from Leatherhead, Surrey, was diagnosed with an aggressive form of breast cancer in January 2007. Without treatment, she was warned she would have less than two years to live. She immediately began a six-month course of chemotherapy and within a week, her long blonde hair fell out and her body went into rapid menopause. ‘For me, that was one of the grimmest hurdles. My skin aged and became very dry. I lost my appetite for sex, and that feeling of being a vital, attractive woman evaporated.’

Three months into her treatment, Lynne had to face another cruel blow when her husband John, a 49-year-old housing director, was made redundant. ‘The hardest thing for him was having to tell me that while I was coping with cancer there would be no money coming in, but that was when I realised we had to look at the positives,’ she says. ‘The blessing was that he would be able to come to the hospital with me and we would have time for the conversations we needed to get through this.’

By the end of the year, John had secured another job, Lynne had finished chemo, had a mastectomy and radiotherapy, and they were able to start rebuilding their lives. Sixteen months later, however, another lump appeared in Lynne’s remaining right breast. Although it did not appear to be cancerous, after nine months of being monitored, she decided to have a second mastectomy to eliminate any risk.

Lynne had opted against reconstruction after her first mastectomy, but with both breasts removed, she decided to try a new treatment in which chest expanders are fitted first, followed by silicone implants. ‘It has been a six-stage procedure, and it has taken two years, but I now have a cleavage again. My mounds are never going to be like real boobs, but they look fantastic in a bra and a bikini.’ Lynne has also recently been to Lucinda Ellery, a London-based salon specialising in hair loss, to have her hair, which grew back fine and dull, enhanced with extensions.

‘If there is one thing I have learnt, it is that you should do whatever it takes to stop you becoming a martyr to breast cancer,’ she says. ‘John never stopped telling me how beautiful I looked, but I had to believe it for myself. You want to feel sexy, but that will only come when you feel good on the inside as well as look good on the outside.’

Reclaiming her femininity has helped Lynne regain her confidence. But so too has the resilience she never previously knew she possessed. ‘Through cancer, I’ve discovered real fear, deep sadness, true friendship and the most amazing bonds with my family,’ she says. ‘We are lucky to belong to a generation where we are allowed to talk openly about cancer and also one in which it is all right to say, “My libido vanished, but it is back, girls, and it can be again for you, too.”’ 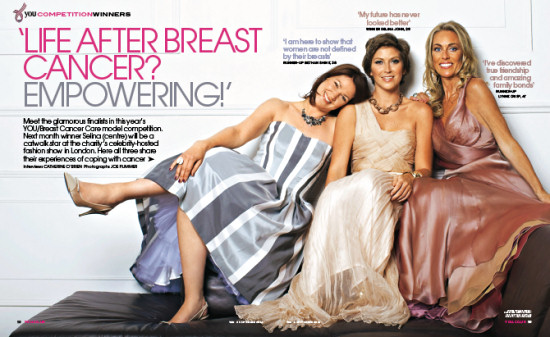