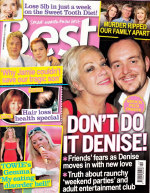 Claire - ‘I felt repulsive and worthless’

Claire Berry, 31, lives with her partner Sam, 32, in Westgate, Kent. They have two children, Macy, seven and Ivy, two and run a scaffolding company together.

Growing up, I was known for my long hair, so when at 17 I noticed that it was starting to thin on top, it came as a real shock. Soon it got so bad that my scalp began to show through my hair. At 18 I was diagnosed with lupus, an autoimmune disorder, and the doctors told me that this had triggered a hormone causing alopecia.

I was devastated. Just months earlier I got together with Sam and I was convinced he’d find me repulsive. But Sam couldn’t have cared less and supported me through my lowest moments.

There were times when I’d push him away whenever he got too close because I didn’t want him to see the top of my head. I felt disgusting and couldn’t understand why he’d want to be with me. My alopecia started to rule my life. I’d spend ages arranging strands of hair to sit over the bald spots and I’d avoid rain and windy weather.

At home I’d cry for hours in front of the mirror and hit myself on the head with a brush in an attempt to shock my hero into growing. I tried some treatments, including acupuncture, but nothing worked. One clinic even told me I’d be completely bald by the age of 22. I was crushed.

Then, in 2010, Sam and I were on a train returning from Paris. I saw the back of my head in a three-way mirror and realised it was almost bald. I cried hysterically for the entire journey.

A few months later a pretty woman asked my advice on something and I instantly recoiled, wondering why she would want my opinion. My reaction made me realise how worthless I felt.

That's why I decided enough was enough so I visited Lucinda Ellery's clinic to ask about Intralace, where panels of hair are woven into a mesh that's fitted onto the scalp. I expected to walk out of the salon with my head held high, but strangely I didn't. For a while my new hair felt like an alien body on my head. It wasn't until six months later, when the clinic cut the hair and added a fringe, that I felt 100% comfortable with it.

Now I couldn't be happier. Every six weeks I have it retied and then realigned every six months. Both cost £90 an hour so it's not cheap, what it's worth it.

My confidence has returned. I no longer dread people being close to me. I can relax in public without feeling as if everyone is staring at me. At last I can be the person I've always wanted to be.


Angela - How could I admit I pulled out my own hair?

My problems started when I was 11 years old and became the target of bullies. At first I developed a nervous habit of twiddling my hair. Then I started pulling out individual hairs and was surprised by the feeling of release it gave me. Whenever I felt stressed I’d pull my hair out to calm me down and eventually it became a need. People started to notice the bald patches.

I remember an aunt saying to me, “You’ll never get married because of your hair” I had no self-confidence at all and I’d do anything to avoid being noticed. The shame was overwhelming.

I married my husband Demos, a family friend, when I was 20, but I never felt able to confide in him about my habit.

By the time our children were born things had escalated so much that I’d lie in bed at night pulling out clumps of hair and then sweep it up in the morning before Demos noticed. I only pulled the hairs from underneath so that I could comb the rest over the bald patches, but really it was impossible to hide.

The stress of being a mum to 3 boys and keeping my terrible secret made the need to hair-pull worse. I was convinced people were staring at me.

I was so unhappy that I’d started comfort eating and had gone from a size 12 to 22. I also missed out on fun times with my boys such as going swimming or four walks because I was scared the water or wind would make my hair look worse.

Once, in the car, one of my sons asked ‘Why don't you have hair Mummy?’ I couldn’t answer him in case he saw the tears streaming down my face. Then in 2006 I saw Magazine article about TTM (trichotillomania), where people pull out their hair. I was stunned to realise I wasn’t alone.

I then plugged up the courage to tell Demos about my embarrassing condition. he was very supportive and with his encouragement I went to Texas for a conference on the subject. Meeting other sufferers was an enormous relief and I found the experience hugely cathartic.

Some months later I visited Lucinda Ellery's clinic and had an Interlace system put in. It took a year to get used to it. But with counselling I eventually came to terms with what I’d been doing to myself. I still find myself hair-pulling on occasions, but I’m learning how to stop. My confidence has improved so much that I recently did a course on interior design. Before I’d never had the courage to sit in the classroom where people could stare at me from the back. I’m getting to the bottom of my weight issues too.

Although I love my new hair, rebuilding my self-esteem is a slow process. But for the first time in my life I can honestly say I’m getting there.

Jackie McKillop, Alopecia UK spokesperson, says: “For women, there is a social stigma. Hair loss can affect your sensuality and how you perceive yourself.”

“Some women question if their partner will still love them, while others give up swimming and going to the gym because they can’t bear using the changing rooms for fear of their hair loss being discovered.”

Find a support group at www.alopeciaonline.org.uk 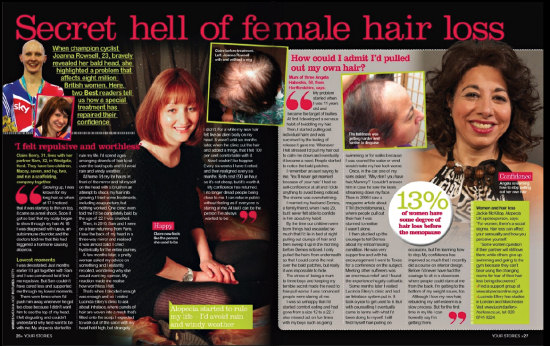