Meet the woman they call the HAIR FAIRY

Lucinda Ellery explains to Woman and Home how her quest for a solution to her own hair loss problems led to a succcessful business that has helped thousands of women along the way. 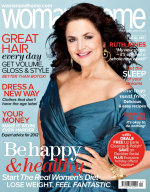 Meet the woman they call the Hair Fairy

Barbara Windsor, Kylie Minogue and Cheryl Cole have all visited Lucinda Ellery’s glamorous salon for extensions. yet the majority of clients use extensions to cover hair loss resulting from medical conditions, including the little-known hair pulling disorder trichotillomania (TTM), on which she is the UK’s leading expert. Lucinda, 59, is single and lives in London. Her daughter, Nicky, 39, and sons, Chris, 37, and Dax, 34, all work in the family business.

You can’t underestimate the power of hair and the significance of hair loss for a woman. hair is connected to our sexuality, femininity and health. If you wake up with half you hair on your pillow it shocks you. It feels pathetic sobbing to your doctor, but how can you carry on? A Yale University study found that we primarily make up our minds about one another within three seconds, based on hair.

My father died when I was nine and everything changed overnight. I was born in what was then Rhodesia and after my father’s heart attack we suddenly had no home, no animals, no nanny. My memory is sketchy, but my mother took me from Africa to Fishguard in Wales, where she had some family. She didn’t really know what to do with me, so she sent me to a convent.

Days after my father’s death, I went to bed with full head of hair then woke up with half of it. I tried a sort of comb-over, but my mother shaved it all off. It would be another 17 years before I let anyone wash it and I still don’t like others cutting my hair.

I got my first wig at 14. At convent, my hair grew back randomly. I used boot polish to cover the bald patches. It didn’t smell very nice, but in my view it looked better. One of the nuns took me to get the wig and I felt like a star. I went from having a short, thin wall of dark frizz with bald patches to having a fountain of long,blonde, thick, straight "hair".

Not having a healthy head of hair affected how I lived my life. In the 60s wigs were more like hats with hair attached and very expensive – a good one could cost £70, while my weekly rent was only £3.50. I shrunk away from hugs and turned down offers to do all sorts of things if the weather was windy. I had very low self-esteem so had a habit of choosing the wrong men and have been married three times.

If you haven’t experienced hair loss yourself, it’s hard to understand the impact. Once, while I was travelling down the escalator in Marks & Spencer, a woman going up and swung out her arm and my wig caught in her bracelet. I was so traumatised, I didn’t go back to the store for seven years, even though it’s one of my favourite shops.

Daryl Hannah’s waist-length “mermaid hair” in the 80s film Splash started my passion for extensions. I bought a magnifying glass to re-watch the film to work out how she could swim in what looked like a wig. I spent a fortune ringing studios the US to get more information. When I discovered she had gone to the trendy London salon Antenna, where they invented the extensions concept, I couldn’t wait to try them. But I left the salon with a head of sausage curls looking like a cross between Dolly Parton and Shirley Temple. I cut them out with a Stanley knife the next day.

I was a single mum in my mid-30s, but left my job in recruitment to learn more about extensions. I went on any course I could find and experimented with every process on anyone who would sit still long enough to let me! I was looking for a solution to my hair problems, but when other women started coming to me, I set up a salon at home in Reading. When the demand was overwhelming I opened my salon in London and more recently, one in Manchester.

I just wanted to provide fabulous here for fabulous women. Some women come to us because they want glamorous “big” hair, but 70 per cent of our clients are dealing with hair loss due to medical reasons, such as chemotherapy, burns or alopecia. I designed a system of ultra-fine semi-permanent hair extensions that work with your existing hair, so you wash and style it as you like.

Alopecia is an umbrella word for hair loss, but about 20 years ago, I realised many of the women I saw were pulling out their own hair. No one knows what triggers this disorder – known as trichotillomania (TTM) – but it’s as compulsive and troubling as alcoholism or drug addiction. At the salon my “trich girls” get beautiful hair and counselling too. Some of them have never mentioned the disorder to anyone before. They can call me any time and I also put them in touch with other sufferers. It’s magical to see a woman blossom in front of your eyes.

I campaigned for eight years for women to be able to get funding from the NHS to come to our salon. I was told my work was “too fashiony” but I persevered. When we did get acceptance from the NHS, it felt like real recognition for the quality of our work. In the current economic climate, things might change, but even if they can fund a few pounds a week, it’s important. Many women tell me without our help, they wouldn’t have returned to work – so it’s helping taxpayers.

I can’t ever see myself not working. I’m about to open a branch in Los Angeles. I have a dream that when I’m in my 70s, my other salons will help fund a sanctuary in the South of France, where I’ll be able to offer cheap but pampering breaks to groups of women with TTM. They’ll sit around the pool in fluffy bathrobes and I’ll bring in specialists in meditation, hypnotherapy and psychology.

Hair loss affects an estimated 8 million women in the UK. It’s not known what causes hair loss but hormones, genes, stress and environment are all factors, according to Dr Sarah Brewer, a nutritional medicine consultant. In some cases the hair grows back, in others it never does.

Alopecia is a medical term that describes loss of hair and sometimes baldness. the most common problem is female pattern balding, when overall thinning, usually beginning from the top of the head, is caused by hormones, ageing and genetics.

Alopecia areata, another type of your loss with patches of baldness may come and go, is thought to be linked with the immune system, mostly affects teenagers and young adults.

The term trichotillomania was first coined in 1889 by a French dermatologist and within psychiatry, it used to be grouped with other obsessive-compulsive disorders, but it is now been reclassified and is considered an impulse control disorder. Hair pulling typically develops in adolescence, sometimes following a trauma. it is believed to affect up to 2% of the population.

If you notice significant hair loss the first move is to see your GP to exclude nutritional deficiencies (such as I iron), thyroid hormonal imbalances and sex hormone imbalances. Some drugs such as minoxidil (or Regaine) have been shown to help. If the cause is TTM, cognitive behavioural therapy can often be effective. 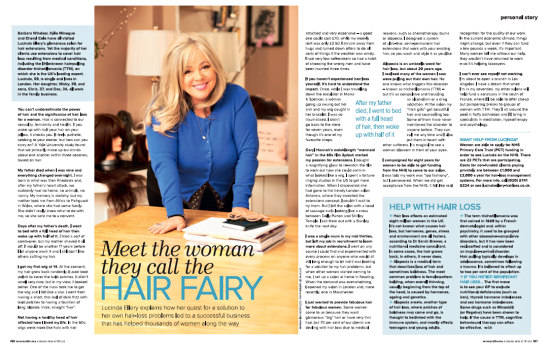